This Week: 1-0 (Redskins/Giants over 45 last night, posted on the FSB Facebook page)

Still clawing my way back to even, but things are looking up. I’ve hit my last 4 NFL plays, had a ML winner with the Raiders and starting to get in the flow of college too. Another brutal loss for the record that ended up being a push in reality with Toledo last week. I posted -7.5 but it ended up -7, as the Rockets got the miracle push in OT after Iowa State missed a chip shot FG to win in regulation. Always remember to buy the hook, especially on a key number like 7.  Read more...

The NFL regular season keeps on truckin’ tonight, with the Redskins and Giants attempting to shake off the body aches and concussion symptoms of last Sunday’s games so that they can do it all over again this evening in The Meadowlands.

Thursday Night Football officially kicked off in 2006 when the Broncos and Chiefs met on the first ever Thanksgiving night game. Since then, the package has been expanded from the final few weeks of the season to a weekly fixture on the league calendar. Every team is required to play one Thursday game a season, and the results have been mixed at best.   Read more... 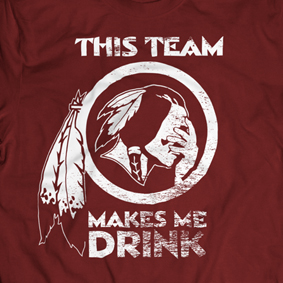 When you think of words to describe Redskins fans, “rational” is far from the first one that fills your head. After a 24-10 win on Sunday over the Rams, and a series of misfortunes throughout the rest of the division, Redskins fans woke up Monday morning to every talking head on local sports talk radio throwing more logs onto the fire that the fan base started the night before on Twitter. The Redskins can win the NFC East in 2015.  Read more...

The good news is week 2 was better than week 1. However, I’d set the bar pretty low with my miserable week 1. My college sides have heated up and it’s just a matter of time before the NFL does as well. If you took Texas -14.5 and not -14, you were victim to a pretty brutal bad beat. I ended up with -14 in my pools, but I posted -14.5, so it’s only fair to count it as a loser. Texas was up 42-14 with 7 minutes remaining and let Rice in the backdoor. That’s the kind of beat that gets an Athletic Director fired.  Read more...

The best football commentary of the NFL’s opening weekend didn’t come from Peter King, Mike Florio, Adam Schefter or any of the other league, er, “National Football League” mouth pieces. Nope, it came from over 9,000 miles away from a bloke who referred to the football as a “hamburger.”  Read more...

Woof. Tough one last weekend; it happens. Whiffed badly on the UNC/South Carolina over, but that Ohio State/Va Tech game felt pretty underish as the 4th quarter grinded away. Urban Meyer pushed the passing game with J.T. Barrett in the game for Cardale Jones and some garbage time TDs pushed it way over.

UCLA kept Virginia out of the end zone all day, until they left the backdoor open and the Cavaliers stole a cover from Bruin backers late in the 4th quarter.   Read more...

I was at the Mets/Nationals game at Nats Park yesterday, and stayed until the final out. This doesn’t make me a better fan than someone who left prior to that point.

The Fan Police were out in full force on the internet yesterday in regards to some of the 34,210 fans who left yesterdays game early. Bryce Harper invigorated their cause by calling out Nats fans himself during a postgame session with the press.

Bryce Harper was asked about the atmosphere especially after the Ramos grand slam. Here's the answer (via @wusa9) pic.twitter.com/0eu5pOAtki  Read more...

Football is around the corner (actually, does it ever go away? NFL Live aired episodes in April), and with it returns the FSB football picks. First up, the college football season win total picks and week 1 picks.

Coming off a very successful 2014 picking games against the spread, hitting 62% winners (77-48-5) in college and pro combined, I’m itching to follow it up with another 60%+ season.

Last season, I posted all my picks on the FSB Facebook page, which I came to realize wasn’t ideal for record keeping purposes. So this season, keep tabs on the site because all the picks will be in posts as well as the comments section of said posts.  Read more...

In September of 1995, baseball was in rough shape.

The strike of 1994 had bled into 1995, creating a slightly shortened season and no defending World Champion since the prior years World Series had been cancelled.

The World Series had only been cancelled once before (1904), and plenty of fans did not welcome back baseball with open arms.

Baseball needed a savior, and Cal Ripken, Jr. was the man for the job. Having not missed a game since May 30, 1982, Ripken was on pace to break Lou Gehrig’s consecutive games played streak in September of the 1995 season.   Read more...