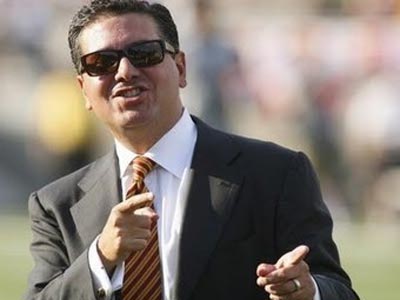 During the Dan Snyder regime, the Washington Redskins have not given their fans much to cheer about when it comes to the NFL draft. Spending free agent money like a poet on pay day and trading away picks for pennies on the dollar has resulted in two division titles, and two playoff wins over 16 seasons since Danny Boy bought the team.

Since the 2009 season, the Redskins have 32 wins total, for an average of a little over 5 wins a season.

It’s actually quite remarkable the amount of suckitude Dan Snyder has been able to bestow upon the Redskins. The NFL system is such that parody is rampant and teams can go from a top 10 draft pick in April to a division championship the following December.

16 game schedules, 4 team divisions and the automatic qualifier for division winners means that a couple lucky breaks or a weak division and next thing you know your hosting a playoff game. Yet somehow FedEx Field has only hosted two playoff games since it was built, including one during Snyder’s first year before he had gotten his stink all over the offices of Redskins Park.

The draft is a place to find cheap talent, particularly in the later rounds. It’s a place to fill out your roster with versatile players who can help on special teams and add depth that inevitably helps you during a playoff push.

None of this is very sexy and it doesn’t get the fans lining up at the box office window for season tickets. So instead Snyder ignored the draft, traded picks away and chased after the Donovan McNabb’s and Albert Haynesworth’s of the world.

Among all the active, drafted players in the NFL, the Redskins are near the very bottom of the list of teams that selected those players. Never mind that their picks didn’t work out in DC, they were picking players that ended up not working out on any other roster as well. You could do a “Where Are They Now?” on the 2008 draft, except I’m sure few Skins fans would tune in.

Enter Scot McCloughan, the new GM for the Redskins. With successful stops with the Packers, 49ers and the Seahawks, McCloughan comes in highly touted among NFL brass and media talking heads. The hype is warranted, as he has overseen many successful drafts and built championship caliber rosters. But will Snyder let him do his job and not meddle with the day to day operations of the draft and free agency?

If McCloughan is given ample space to operate, this team will drastically improve on their standing as one of the worst drafting teams in the league and should become a contender in the NFC East on a regular basis.

If Snyder marks his territory like his track record suggests he will? Well then bottoms up Redskins fans.

Speaking of bottoms up, here’s a handy drinking game (similar to the one I did for the Redskins & Cowboys MNF game when I highly suggested to take Skins +9 and the money line, see I don’t always hate on the Redskins) to get you through the NFL’s dog and pony show of revealing the picks for this years class.

Whether watching at a bar or at home, you’ll be guaranteed to have a nice glow on (21 years or older, of course) in the event the Redskins trade away half their draft before settling on the ghost of Heath Shuler in the 2nd round.

On to the game!

Take one drink if:

Chug your drink if:

Enjoy the draft, and of course..if you’re driving, don’t drink…and if you drink, don’t drive.