Ryan Zimmerman has the bat that makes the Nats offense kick into high gear and the arm that can single-handedly sabotage a game.

He’s won two Silver Sluggers, a Gold Glove and been named an All Star. He’s missed 158 games since the start of the 2010 season, including 45 this year.

He’s a selfless teammate, who transitioned to LF for 26 games this season after never playing the position professionally. He’s also the reluctant 3rd baseman who may be trusted upon in crucial October moments at a position he seems ready to leave permanently.

Ryan Zimmerman is the “Face of the Franchise” for the Washington Nationals. Ryan Zimmerman’s face is yet again, missing from the Nationals lineup.

In a cruel and all too familiar scene at Coors Field this week, Ryan Zimmerman stepped onto a baseball field healthy and limped off of it with the help of Lee Kuntz, the Nationals trainer. Early reports were a hamstring strain and a trip to the 15 day DL. The injury is “substantial” and the Nationals now search for answers after having a healthy lineup disturbed once more. The Nationals are 21-24 this season without Zimmerman and 34-19 with him. His batting average had gone from .245 to .282 over the past 30 days and his presence stretched out a lineup that included Ian Desmond and Wilson Ramos batting 7th and 8th respectively. In the field, Zimmerman gamely took on LF duties without blinking, making several fantastic plays at a position that was foreign ground for him. He’s a team player with the game to boot, and when given a contract extension prior to Spring Training in 2012 that would keep him in Washington until 2019, few fans blinked.

A funny thing happened on the way to Nationals immortality for the slugging 3rd baseman from Virginia Beach via UVa. A seemingly standing reservation on the disabled list and an arm that has betrayed him so often he seems to have lost almost all faith in it. 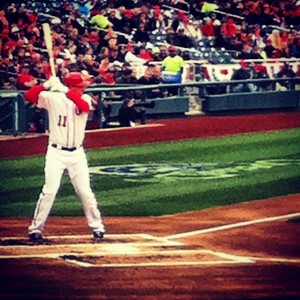 Rare finds at Nats Park: Ryan Zimmerman at bats and a beer under $9.

There isn’t much that will make a Nats fans heart skip a beat, like a routine grounder to Zimmerman at 3rd base. His clunky, robotic throwing motion is reminiscent of Charles Barkley’s golf swing. Frankly, it ain’t pretty. Whether he sails the ball or throws into the ground, these mistakes often loom large. Slick fielding 1st baseman Adam LaRoche often saves the day (and the error for Zimmerman) while risking life and limb (and beard) for the errant throws. Zimmerman gritted his teeth through the 2012 season with a badly injured shoulder that required several cortisone shots along the way. Arthroscopic surgery in the off season was sold as the cure to the throwing issues, but they resurfaced on many occasions in 2013. Whether it’s the lingering effects of a knife to the shoulder, or a mental issue similar to Chuck Knoblauch’s throwing yips for the ’99/’00 Yankees, these mistakes will become costlier as the stakes are raised this fall. Zimm in LF would solve the problem, except with a healthy lineup it’s going to be tough to sit Denard Span, especially with the streak he’s been on.

The injury issues are just as troublesome. Some can be chalked up to bad luck, but when you are consistently headed to the DL, a “fragile” label will follow you. Zimmerman in his prime at 3rd base was a marvel to watch, equal parts grace and physicality. He took a beating; stealing extra base hits as he gave up his body day after day. Perhaps that contributed, but at 29 years old and in his 9th full season in the Major’s, it looks like it’s time for a position shift. First base appears to be the landing spot next year, as Adam LaRoche’s contract is up after the 2014 season and Anthony Rendon looks ready to take over 3rd. However many local fans have clamored for a trade of Zimmerman, logically targeting AL teams where he can DH and save his body. I disagree with trading Zimmerman and still think he’s too good of an athlete not to have on the field (just not at 3rd). In fact, his last two injuries have come running the bases, so the daily grind in the field shouldn’t be a huge concern. Once he’s in a groove, his presence in the lineup is significant. His career splits also point to stronger second halves of the season (hence only one All Star Game) and his knack for big hits in big spots always makes his 6’3″ frame in the batters box at a crucial moment a welcome site.

At this point, seeing him on the field at all is a welcome site.

2 thoughts on “The Zimmerman Situation”