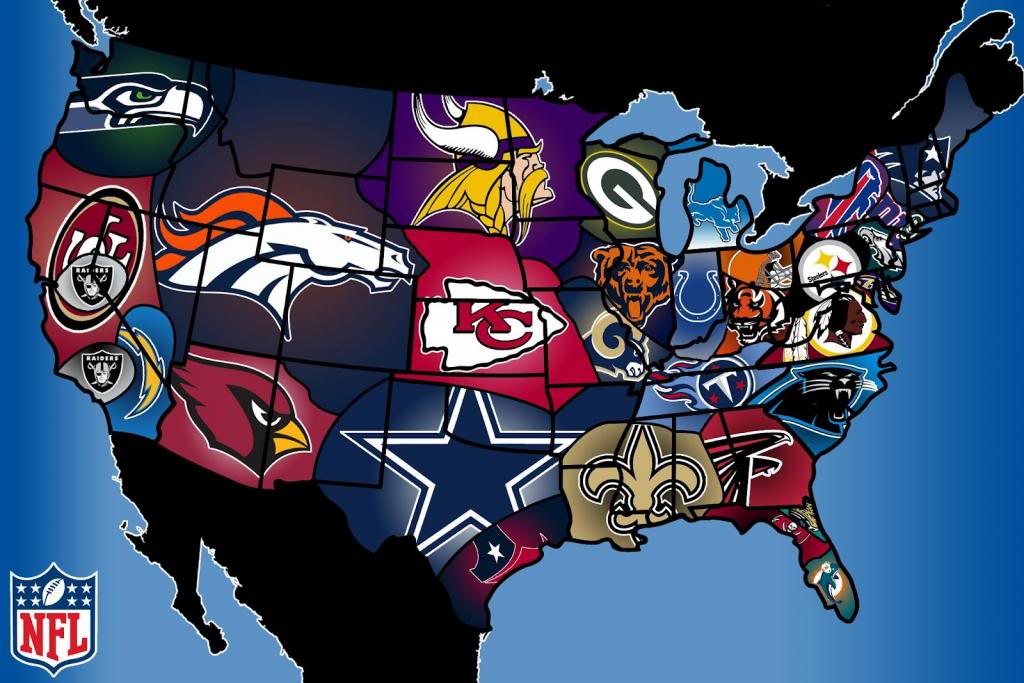 The sun is slowly setting on another NFL season. It feels like it was just yesterday we were talking about Johnny Manziel’s prospects with the Browns, the Ray Rice fiasco and the Redskins name change drama. Actually, that was yesterday. But, since late august when I previewed all the divisions and predicted the win totals, there’s been a lot of football played. For those looking to audit my performance on the predictions, the AFC West preview was posted on our Facebook page.

With four weeks remaining, it’s officially crunch time. The way the NFL works now, the season really doesn’t start until week 10 or 11. Prior to that, you just need to not fall totally out of the race. If you’re still alive for a playoff berth when November rolls around, then you get to play coveted, meaningful, late season games. You’ve had yourself a season. If your out of it before trick or treaters start knocking on your door, demand a refund for those tickets and replica jerseys you bought, your team didn’t have a season.

It’s really as simple as not getting eliminated. Past seasons have shown that seeding and home field are not nearly as important as they used to be. Stay in the hunt and sneak into the playoffs; hopefully healthy and on some sort of a hot streak. With single elimination playoffs and the parody of the league, that’s really all you need to win a Super Bowl.

The beauty of it from the league’s perspective, is that with all this randomness, every franchise should have a season within a five year period or so. Any prolonged cold streak (seriously Raiders, what’s your problem?) means that the top level executives of that team really have no idea what they’re doing. Or, they make so much money off a losing product that there’s no reason to spend money on free agents or competent front office personnel to try and create a winning product. That randomness is what brings so many fans back. The Super Bowl really is the easiest title to win in pro sports. Hope springs eternal.

Speaking of Super Bowls, whose going to win it this year? Well, based on the past couple paragraphs…who the hell knows!? Since you’ve got lots of holiday shopping to do, lights to hang and work parties to get embarrassingly drunk at over the next few weeks, here are 10 games you shouldn’t miss that will go a long way to deciding who plays in the Super Bowl.

Ravens at Dolphins, 1PM, CBS: In what basically amounts to an elimination game, Baltimore visits Miami in a matchup that will increase the winners chance of making the playoffs by 30% and decrease the losers chance of making it in by 20%. Throw in the fact that these two teams regularly play in very close, competitive games and this smells like a 27-24 nail biter that has Scott Hanson breathlessly cutting in on the RedZone channel to give yet another update from South Florida. Extra points to this game for having Ryan Tannehill and Joe Flacco, two QBs that can sling it but are also good for game changing pick 6’s when you need it most to keep the drama alive.

Seahawks at Eagles, 4PM, FOX: I’ve been an NFC guy my whole life, and nothing gets me more pumped than a 4PM, NFC inter-conference game between two contenders in December. Bonus points for being played in a cold weather city (Philly, Sunday forecast partly cloudy with temps in the upper 30’s). Day will turn to night by the time this ones over, as two teams with very different styles clash in southeast PA. Both teams are coming off Thursday games, so you know they’ll be prepared. I still can’t wrap my head around Mark Sanchez starting meaningful football games again, but Chip Kelly’s fast break offense versus the Seattle D will be great theater. Seattle hasn’t seen skill players like McCoy, Maclin and Sproles in quite some time. The over/under on stadium fan fight videos ending up on Deadspin the Monday morning after this game is set at 3.5.

Patriots at Chargers, 8:30PM, NBC: Maybe you’re going to be out all day on Sunday, chopping down Christmas trees or circling around P6 for a spot in the garage at Tyson’s II. Well you’re in luck, because you’ll still get to hunker down with a Hot Toddy and listen to Al Michael’s not-so-veiled gambling references as the Brady/Belichick duo heads west to play the Chargers. A win for the 8-4 Chargers would do wonders for their playoff chances (20% bump if they win). The Patriots will be ornery, coming off a loss last Sunday at Lambeau. Pissed off Brady? Philip Rivers at full tilt intensity? Belichick wearing a hoodie in Southern California? Al Michaels clandestinely giving away a free ATS pick during the pre game? Sign me up.

Bengals at Browns, 1PM, CBS: The battle of Ohio, round two: This time with more Manziel! Well maybe. The Browns are going with Brian Hoyer again this week in what feels like a win or go to the bench type game. Cleveland is currently 7-5, which is good for the 11 seed in the AFC playoff standings, due to all the tie breakers with the five other 7-5 teams. The drama after week 17 in AFC could likely come from a little know NFL tie breaker wherein the head coaches of the tied teams get $1,000 in chips and all sit down at a Blackjack table. The coach with the most chips after three hours (about the length of an NFL game) wins. Seriously who wouldn’t watch that? Andy Reid hitting on 14 against the dealer’s 6 while Mike Tomlin sips on Cran & Vodka’s and Doug Marrone red button’s calls from E.J. Manuel’s shrink? I’d pay. Anyways, Bengals and Browns will either be a pivotal AFC North game or Manziel-palooza. Fun either way.

49ers at Seahawks, 4PM, FOX: Well, nowhere to go but up in this matchup after the hot garbage that was the Thanksgiving game. Seattle played well enough, San Francisco played awful, particularly Kaepernick and the offense. Two Seattle miscues ended up not backfiring (dropped snap by punter that somehow ended up a fumble by Parrish Cox on the return, and Wilson fumbling untouched at midfield but Seattle recovering) but it probably wouldn’t have mattered, Kaepernick was that bad. Assuming the Niners go across the bay on Sunday and beat Oakland, this one could have some big time juice in regards to the standings, especially if Seattle loses at Philly. All that being said, if Kaepernick is now Henry Rowengartner after the super human effects of his elbow injury were gone, he better hope Mrs. Kaepernick is in the stands in Seattle.  Thanksgiving night aside, this matchup is still must see TV until further notice.

Cowboys at Eagles, 8:30PM, NBC: Another Thanksgiving rematch, where the road team is looking for revenge after taking a beating at home. In that game, Romo came out and said he didn’t take the pain killer he’s been taking prior to other games.  Somehow the DEA has not inspected the Cowboys locker room yet, if those searches of NFL locker rooms were even legitimately unannounced. The whole ordeal definitely seems like window dressing put up by Roger Goddell to combat former players like Jeremy Newberry saying that NFL locker rooms are basically Tijuana pharmacies with hot tubs and beat reporters.

Cowboys and Eagles on a Sunday night with the division probably on the line? A full throated, liquored up Philly crowd egging on December choke artist Tony Romo? Philly legend Howard Eskin on the sidelines in his fur coat? Bob Costas doing the pre game with George Constanza’s sable hat on? The only way NBC could screw this up is if “Peter Pan Live! The Lost Footage” airs at halftime. Seriously, what was that?

Falcons at Saints, 1PM, FOX: The NFC South standings are like a four car pileup that you can’t help but stare at. 7-9 is still a realistic record for the division champ, but if the Saints can win this game it looks more like 8-8 will get the job done. Good job fellas. However the Saints are not to be trusted this season, so sweeping their next two (Panthers at home and then at the Bears) is no easy feat for this bunch. As long as both teams have a pulse when this game comes around, expect fireworks. These two always seem to play some wild games, and the fan bases and cities despise each other. A very underrated rivalry. I guess when ESPN isn’t in your backyard you don’t get the artificial hype and extensive coverage that they can deliver to a matchup (looking right at you Boston and New York). Matt Ryan and company have the horses to score some points, and the Saints have been very beatable at home. Bonus points for a classic duel of coaches who make mind boggling in game decisions.

Colts at Cowboys, 4:25PM, CBS: Oh how the networks must be drooling over a competent, entertaining Dallas team. It’s CBS turn to air a marquee Cowboys game, this time against Andrew Luck and the Colts. Indy could have their division wrapped up by then and Tony Romo could be in a full body cast watching Brandon Weeden throw ground balls to Dez Bryant and Jason Witten. Other than that, this will probably be the game that makes or breaks championship games in leagues across the country. Who am I kidding? A bunch of late season replacements and backups will decide your fantasy league, which is why I don’t play anymore. Now get off of my lawn!

Seahawks at Cardinals, 8:30PM, NBC: Possibly for the NFC West, assuming the Niners continue their fantastic collapse that will culminate with the front office running a coach out of town who has won 73% of the games he’s coached over almost four seasons as well as a 5-3 record in the playoffs, including an NFC Championship after taking over basically the same roster that Mike Singletary had prior and overnight turning it into one of the best teams in football while dealing with a QB controversy in one season and playing in the toughest division in football….but I’m not bitter!

On second thought, this game will suck. Don’t watch this game. Home Alone 2 will probably be on.

Until then, enjoy the games and go like our Facebook page. Free winners are 57-41-4 on the season!