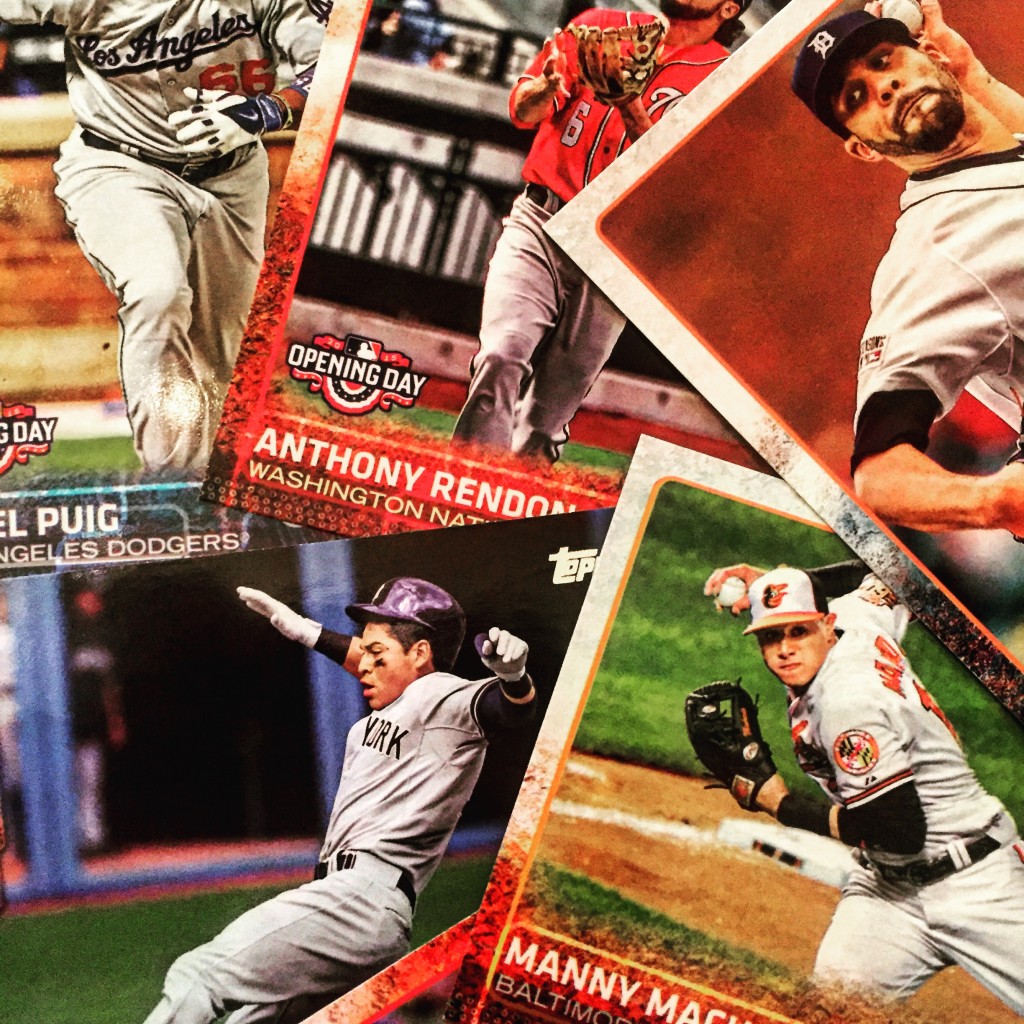 I’m 33 years old and I should be retired by now. As an impressionable and extremely lazy 11 year old, The Guy Behind The Case (official title) at the baseball card shop assured me this would be the case.

If everything had gone according to plan, I would have paid this months cable bill with a handful of Donruss ’89’s from that one factory set I still had laying around.

Instead? I’m pecking at keys, with boxes of Bobby Bonilla rookie cards in the darkest corner of my most unfrequented closet.

In my preteen years, I was subconsciously looking for a sales floor, a gambling hall and a financial advisor. Unbeknownst to me, I found all three at a single, parental approved, location. I’d ride my bike up to Home Run, or Sluggers, or whatever other cliche named card shop would open up within a brisk bike ride of my house and learn how to sell, converse about sports, take risks and invest.

After a random stop at Branded Memorabilia on Route 29 in Fairfax, all the memories came rushing back.

Sales 101 With The Guy Behind The Case

When I’m not writing for this site, I’m selling. Until someone wants to buy some ad space here (I’m still waiting to hear back from Blockbuster Video), that will be the case for the foreseeable future. To learn how to sell, you need to get sold. And the first time I got sold to was in a baseball card shop.

As a matter of fact, the last time I got sold was also in a baseball card shop, when I walked into Branded Memorabilia.

The Guy Behind The Case at Branded Memorabilia was right out of central casting. His greying ponytail and push broom mustache went well with his gift of gab for all things collectible.

“Got a great Kris Bryant here, twenty bucks”, he informed me before I had time to find my bearings in the cozy, cluttered confines of his shop.

“These things go up and down so much and this kid is the next big thing” I’m casually told. “If he hits a couple home runs this week this card will be $30 or $40 soon.”

The Guy Behind The Case clearly retired from a career as a penny stock trader before he found his home in a Fairfax strip mall.

I politely side step his sales pitch; I’m here to take a walk down memory lane, not haggle over the price of a card.

Truth be told, The Guy Behind The Case was actually a very nice fellow. We chatted about how he ended up behind in the case in the first place (retired, knows the owner and picked up some hours; sounds like a pretty chill retirement to me) the highlights of my own collection (Jerry Rice, Steve Young and Dennis Rodman rookies, plus millions of Jordan’s and my random autograph collection) and some of the highlights of his shop (too many to name, lots of autographs).

As we built a little rapport and he discovered I’m a 49ers fan, he went right back into kill mode.

How about a mounted display with replicas of the five 49ers Super Bowl rings? Perhaps a whole box of random Patrick Willis cards? As he hit all the classic sales techniques I had flashbacks to the shops I frequented as a kid.

With $10 in my pocket and left to my own devices, it was just me and my buddies versus The Guy Behind The Case. Would I blow it on one card or diversify my money across four packs? Would I fall for the sense of urgency The Guy Behind The Case artificially created over some version of the present day Kris Bryant card, or would I go in and buy what I’d told myself I wanted all along?

And what if I was there to sell? Could I step into the ring and get fair value? I remember one time selling four Starting Lineup figures to a shop called Sluggers, located in Great Neck Shopping Center in Virginia Beach. They’d been removed from their boxes (and thus, very much decreased in value) but The Guy Behind The Case gave me $40 a piece.

I felt like a millionaire, but I can’t bare to look up what they are worth now. Just four guys named Michael, Larry, Isaiah and Magic.

There used to be this comically large card shop at Lynnhaven Mall in Virginia Beach, the name of which escapes me. Probably because there’s no way it was in business for longer than a year or two. Even during the boom days of card collecting, paying rent on a space the size of a Jared Jeweler (but instead of selling precious gems, you’re selling Gem Mint 10 Todd Van Poppel rookie cards) was a losing proposition.

However, as a 12 year old kid, a sound business model was not on the top of my mind when ranking card shops. The gargantuan mistake that some poor local bank made lending this shop money created my own personal Xanadu.

A piece of real estate large enough to be the venue of an indoor soccer game, with cases upon cases of sports cards and crowds of like minded, sports crazed peers? Sounds like where I presently hang out on a typical NFL Sunday, with the cards long since replaced by Buffalo wings and cheap beer.

But back in the pre internet, not yet driving age days of my youth, a monthly trip to the baseball card shop was like a seasons worth of bar room banter about Cy Young favorites and Super Bowl predictions.

The Guy Behind The Case at Branded Memorabilia indulged me, as we talked Bryce Harper, Alex Ovechkin and the Washington Wizards. However, rather than explore new turf on any of those subjects, we pleasantly exchanged platitudes about all that DC sports has to offer.

You see, I don’t need the card shop or The Guy Behind The Case to learn new nuggets of sports info anymore. I’ve got access to a million different sources of sports content, and my phone even delivers to me the news I specifically want to know as it happens.

It was simpler times before the internet, I thought to myself, when I got news second hand from sources I had to seek out rather than immediately from sources that deliver the news straight into a mini computer in my pocket.

As I thought this, I snapped a few pictures of the shop and posted them on Instagram.

Every blue blooded American who has sat at a roulette table and watched the wheel go round and round was probably ripping open packs of cards in their youth.

The card shop was the casino of my younger days, with The Guy Behind Case serving as a surly version of the garden variety black jack dealer. (For fans of The Simpsons, think of The Guy Behind The Case as a more enterprising version of the Comic Book Guy. He can hide his disdain for the customer a little better because he’s more aggressive in trying to make a buck)

Was there a bigger rush in those days than peeling back the wrapper of a brand new, highly sought after pack of baseball cards? I was convinced it was a matter of when, not if, that I would find that one card (probably that Upper Deck Griffey Jr. rookie) that would solve all my financial problems (as a 12 year, namely, not having any income) and set me up for an early retirement in some tropical location. I could tip all my waiters with J.J. Stokes rookie cards.

A kid in the shop opening a pack and screaming in jubilation after finding that David Justice rookie card you were convinced didn’t even exist is like walking past a craps tables where some guy is on the heater of his life. You can’t just walk up to your room and call it a night after seeing that. Give me five more packs of ’99 Bowman’s, now!

This whole crazy concept was seemingly legitimized by the faithful Beckett’s Price Guide. I felt like mini Gordon Gecko leafing through it’s pages of fine print, seeing how my “portfolio” was performing that month.

As far as I was concerned, I was just building up assets. One day, I’d turn over this fortune to my next of kin and we’d all drink champagne on our weekly Sunday cruise aboard my 40 foot yacht.

As my visit to Branded Memorabilia was winding down, I settled on three packs of cards ($6 total, seems low right?) and was on my way. The Guy Behind The Case threw one more Hail Mary at me, his version of “let me grab one more coat out of the back I think you’re going to love.”

A Bryce Harper bobblehead doll, the same ones they gave away last summer before a game at Nats Park. Price tag?

$100. Not today my friend. Maybe you start selling booze to loosen up those wallets.

I settled on a pack each of  2015 Topps “Opening Day”, 2000 Topps Finest NFL and 2015 Prestige, the last being a brand I’ve never heard of before but I couldn’t resist given that Johnny Manziel was on the cover of their packs. Something tells me the folks in the marketing department at Prestige that made that call are all available for work.

The results? Pretty much crapped out other than scoring an Anthony Rendon and Manny Machado in the baseball pack.

Topps Finest was not so fine:

Somehow, I missed out on any of the Detmer or Huard brothers.

The Prestige pack was so under whelming I won’t bore you with all the names (who in the hell is Keshawn Martin?)

In the end, it was refreshing to step back in time and recall the emotions and obsessiveness that baseball card collecting provided me as a kid.

I learned how to buy, sell, negotiate, collect, budget money, take risks and invest (well sort of, most of the cards from the 90’s are pretty worthless now. I guess I learned what NOT to invest in.)

The only thing that would have made my whole collecting experience complete would have been if I ever ran into to this guy.