So The World Cup just ended. As the tournament progressed, it continuously left a wake of soccer trolls and soccer defenders, and the debate over soccer grew more contentious with each flop and each brilliant goal. Soccer detractors would launch into an all too familiar rant about the pace of play, lack of scoring and overall dullness of the game. Soccer fans, would often retort with 3 words when The Beautiful Game was criticized for a lack of action and scoring.

OK, What about it? I heard this in bars, at the office and online. First off, this question presumes baseball is incredibly popular at the moment. While attendance is up in many parks, TV ratings are suffering greatly, including the playoffs and World Series. Younger audiences are not gravitating to America’s Pastime and just this week, Nats star Anthony Rendon said he thinks watching baseball on TV is boring.

So, you aren’t exactly going after the sporting zeitgeist by taking a shot at baseball. The natural argument for soccer, would be to take on football (The NFL, I can’t stomach calling it “American Football”). The Wall Street Journal had an article where they determined there is only 11 minutes of action in an NFL game. Talk about no action. The average NFL game is threatening the 3 1/2 hours mark. However, soccer fans know they have no shot of taking on the NFL. So they looked for a fight they might have a chance of winning.

I actually had these 2 sports worlds collide a few weeks back, when I was at Nats/Rockies. The Half Street Fairgrounds across the street from the stadium actually had a huge screen brought in just to broadcast the game. It was also on inside the stadium on the JumboTron. In this case, baseball wasn’t afraid to embrace soccer, although DC did have the highest ratings for the entire World Cup. The Nats could have been hedging their bets and making sure the soccer crowd still came out to the game.

USA almost puts it away in regulation time, during their loss to Belgium. Pregaming Nats fans indulge.

Soccer and baseball both have die hard fans and the sports include many teams with deep roots and rich history. Both sports are often called dull, slow and boring. Where baseball fans have stopped giving a damn about whether they are a fan of a niche sport or a mainstream sport, soccer fans let this debate rage within inner circles. Your average soccer fan will tout the TV ratings (all time highs for this World Cup) and demand more coverage on TV and Sports Radio.

My argument to this would be…why?

There are so many outlets to consume sports, why do you want to go mainstream? ESPN ruins sports, plain and simple. I can’t be swayed otherwise. When they get their paws on the rights to a league, they cram it down your throat until you can’t breathe. Once the commercialization and Disneyfication of the sport is complete, it’s often times unrecognizable from the original product. ESPN ‘s Super Bowl panel of 9 (NINE!) people comes to mind.

I’m a Nats fan. I have team blogs I go to regularly, I read the Post, follow the beat writers on Twitter and I watch MLB Network, which is fabulous. What else do I really need?

Full disclosure: I love baseball and am apathetic towards soccer. For me, there’s nothing better than a Sunday afternoon at the park. I’m totally going to be the old guy at a game, with a bunch of pins in my hat and keeping score. My wife would argue I already am that guy. 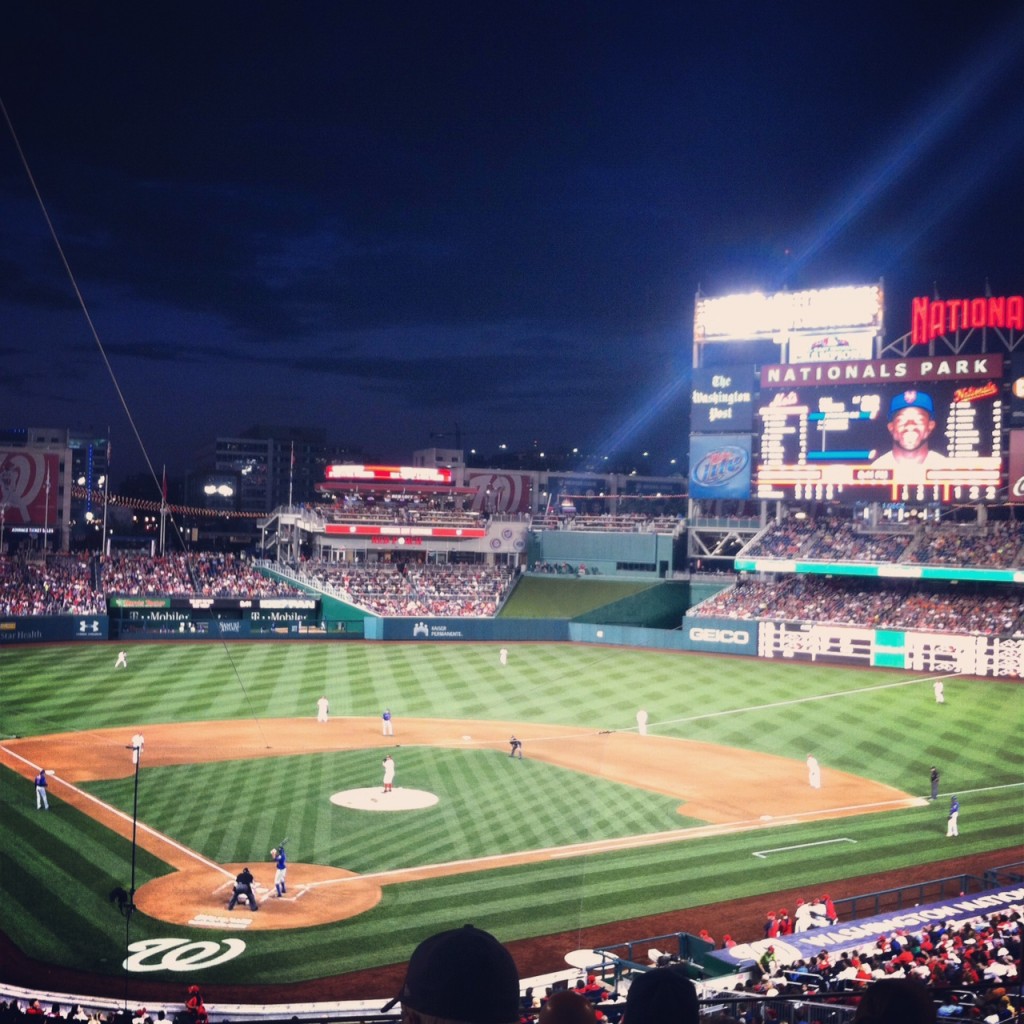 If Chris Berman ever shows up here, I won’t be happy.

I’d say soccer and baseball are natural allies. Both fight a perception battle. As far as getting a seat at the major sports table in America? The NFL ate that table, which will be documented during a 9 part series on ESPN, hosted by 9 panelists.

Photo and video by Taylor Adkins

One thought on “Soccer vs Baseball”