38 miles separate Nationals Park and Camden Yards; this past Tuesday 21 minutes separated the final outs that would clinch the NL East and the AL East for the Nationals and Orioles respectively. Not since 2004 when the Dodgers and Angels clinched on the same night, had two teams in the same metro area locked up their divisions within a couple commercial breaks of each other. It made for great television, as MASN and MASN2 featured extended post game shows that covered both celebrations. 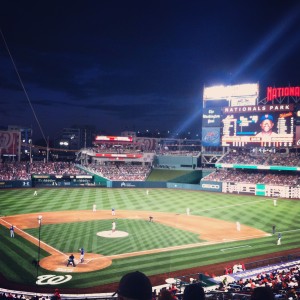 The Nationals were rushed off the field in Atlanta so that a post game concert could get set up (seriously what team with any hopes of making the playoffs relies on a mid September concert to draw fans?) and then proceeded to douse the Turner Field visitors clubhouse with champagne and cheap beer. MASN’s Dan Kolko probably still smells like beer.

The Orioles celebration came at home, where Buck Showalter sat back in the dugout and cracked a rare smile as he watched his team revel in the franchise’s first AL East championship since 1997. A delirious scene at Camden Yards culminated with Adam Jones spontaneously pieing fans in the face up and down the 1st base line. Not shaving cream pies — we’re talking legit pies from a place called Dangerously Delicious Pies in Canton.

The wins that sealed the division titles reflected how each team has won all season. The Orioles slugged their way past the Blue Jays with eight runs (including two home runs) and overcame some initial shakiness from starter Ubaldo Jimenez to secure the 8-2 win. The Nationals grinded it out with the Braves until Ian Desmond gave them all they would need, a two run moon shot deep into the left field seats of cavernous Turner Field. Tanner Roark and the bullpen would lock things down for the 3-0 victory over the rival Braves.

Naturally, the talk from Woodbridge to Aberdeen and all points in between has been about the potential pandemonium that would accompany a Nationals vs Orioles World Series. Nationally, this series would more than likely result in poor ratings and minimal interest. Locally, this series would kick into overdrive a rivalry that has been lukewarm at best since baseball returned to DC, mainly due to the infrequent matchups that occur due to interleague play.

Washington Nationals: In 2012, the Nationals surprised everyone with an NL East championship that seemed at least a year ahead of schedule. Owners of the best record in the NL, the Nats entered the playoffs under a cloud of criticism for shutting down Stephen Strasburg after his innings limit was hit. The Nationals would lose a gut wrenching NLDS in five games to the Cardinals, seemingly validating all the criticism they got for leaving their best pitcher in the dugout for the entire series. In 2013, the Nats entered the season as an overwhelming favorite to win the World Series. That hype paired with an inability to beat the Braves led to a dissapointing 86 win season that left them sitting at home in October.

It was with this backdrop that the Nationals attacked the 2014 season. With the sour taste of the 2012 playoffs and the 2013 season still very much in their mouths, the Nats have been one of the most consistent teams in baseball. It speaks to the balance of this roster, that a team with a good chance to end up with the best record in the NL doesn’t have a realistic candidate to finish in the top five of the MVP voting.

That depth, combined with phenomenal pitching from the starting rotation and bullpen has gotten Washington this far. Exercising the demon that was the Atlanta Braves was the finishing move. After starting 1-7 with the Braves this season, and struggling mightily with them the past couple of seasons, the Nats went 7-4 vs Atlanta to end this season. After Ryan Zimmerman’s injury, I wondered if the Nats could survive the season, given their record splits with and without him. Since that column, the Nationals ripped off a 10 game winning streak that was filled with five walk off wins in six games, a sweep of the Pirates and a series win over the Giants, with the lone loss being the streak buster. An All Star Break dead heat with Atlanta turned into a runaway, and now the Nationals can officially look towards October.

In their way, is the other thorn in their side over the past few seasons, the St Louis Cardinals. Currently, the Nats own the best record in the NL which would guarantee them a date with the Wildcard Game winner and not the Cards. Securing the one seed could be the difference between a pennant and a tee time. Besides the heart breaking 2012 NLDS, the Cardinals have owned the Nats over recent years.

The four man rotation of Strasburg, Jordan Zimmermann, Doug Fister (that trade is looking like highway robbery now) and Gio Gonzalez should be enough to get by the Pirates. With Drew Storen looking as confident as he ever has in the closer role and Tyler Clippard setting him up, I don’t see the Pirates lineup being able to scratch out enough runs for a series win.

The Giants would be a formidable test, especially with the lineup they can post every day. However their pitching has fallen on hard times since their 2010 and 2012 World Series wins. The Nats scored an astounding 40 runs on San Francisco in six games this season.

A Dodgers draw would almost assuredly be an NLCS matchup, and one that the Nats wouldn’t shy away from given the 2014 results. Washington took four of six from LA this season, with the two losses being Clayton Kershaw starts. Washington’s lineup matches up well with the pitching of LA, and the Nats finally solved Kenley Jansen in early September, scoring off of him for the first time ever in dramatic fashion as Adam LaRoche became only the 2nd player in MLB history to record more than 5 RBI in a game after entering said game in the 9th inning or later.

Prediction: The Nats seem poised to take this best record to the bank. LA in a five game series is a really tough draw, considering you have to face Kershaw twice, so St Louis could get knocked out there. An NLDS versus Pittsburgh or San Francisco should be a three or four game series win for the Nats, setting up an epic NLCS against St Louis or LA. The Cardinals are built for October; it seems unlikely they wouldn’t advance to the NLCS. It would go seven games either way as the two teams push each other to the edge. Gio Gonzalez could be an X factor, as the curve ball throwing lefty has struggled mightily this season, but has a sub 1.50 ERA versus the Cardinals since 2011. Washington seems primed for a pennant run after the past two years, but it’s tough to take them over St Louis with any conviction. They’ll get to the NLCS, then all bets are off.

Baltimore Orioles: When I was living in Columbia, MD a few years ago, something really struck me as I listened to Baltimore sports radio and sat in traffic. People in Baltimore City and the burbs LOVE the Orioles. Love ’em. No bandwagon; they love ’em. Sure, the crowds at Camden Yards stunk, but you wouldn’t go to the games either if the team was locked in the cellar of the seemingly impenetrable AL East. With the big spending Yankees and Red Sox trying to fend off the pesky Rays, the Orioles were an afterthought of an afterthought. They were the entree that got left off a menu of a restaurant that never even opened. As far as the city fathers of the MLB were concerned, they didn’t exist. This is a city that is ready for meaningful baseball games, after getting a taste in the 2012 ALDS.

Slowly, something has changed in Charm City. As we noted this summer, the Orioles started locking up key guys even though Camden Yards was still serving as a layover for New York and Boston, as they inevitably collided to see who would come out on top in the AL East. The lineup was built upon, the pitching staff followed a hit and miss approach (imagine this team with the Cubs version of Jake Arrieta, or any true ace for that matter) and then the entire team was jolted by the hiring of the best manager in baseball, Buck Showalter.

Showalter is the best. When he’s not making a Seinfeld cameo, he’s building a top notch baseball team. He left the Yankees and Diamondbacks in better shape than when he arrived; both teams can partially thank him for World Series titles. No one manages a lineup or bullpen like Buck. Now his team, built on power and a sneaky good pitching staff (no current starter under 3.00 ERA but everyone 4.00 ERA; the entire pitching staff has the 3rd best ERA in the AL) is set up for a long October run.

The problem with Orioles keeping up their part of the bargain for a Beltways Series, is the AL. It’s much tougher than the NL, no doubt. The Tigers have a rotation that includes Max Scherzer and David Price; two pitchers who will make any playoff series a struggle. Detroit’s bullpen has been a disaster, but the lineup still has studs like Miguel Cabrera and Victor Martinez. The Tigers also seem to play to their competition, owning an 8-8 record versus the White Sox and a 7-8 record versus the Twins, yet they have a 10-3 record versus the Orioles and A’s combined.

Then you’ve got the Angels, owners of the best record in baseball. Showalter talked about playing his regulars until they are eliminated from overtaking Anaheim for the one seed. That seems unlikely. Anaheim has been a freight train since the All Star Break, going 38-20. However, if you look closer, the Angels have loaded up on the bottom feeders of MLB; it wouldn’t surprise us if they got knocked out in NLDS by Oakland or Kansas City. The loss of Garett Richards will be a huge blow to the rotation next month. Also, after Mike Trout and Albert Pujols the lineup and bench lacks depth outside of Howie Kendrick and Erick Aybar.

An Oakland/Baltimore ALCS seems like destiny, unless the A’s finish off an epic collapse by losing the 2nd Wild Card spot to Seattle after having the best record in baseball for a good portion of the season. After all the drama with Manny Machado and benches clearing scuffles between these two clubs this season, an A’s/Orioles ALCS would be high drama. Unfortunately Machado would be absent, as he recovers from knee surgery.

Outlook: There is A LOT of good pitching in the way of Baltimore as they shoot for a pennant. If Oakland were to finish off this collapse, that would mean Seattle and Kansas City would get into the Wild Card round. That’s more good pitching thrown into the mix. The Orioles strike out a ton, and don’t draw a ton of walks. That approach can spell doom in October, as they will likely face the seasoned Tigers in the ALDS. It’s tough to go against Buck, but I don’t see the Orioles Magic continuing past the ALCS. It’s a shame this team lost Machado and Wieters.