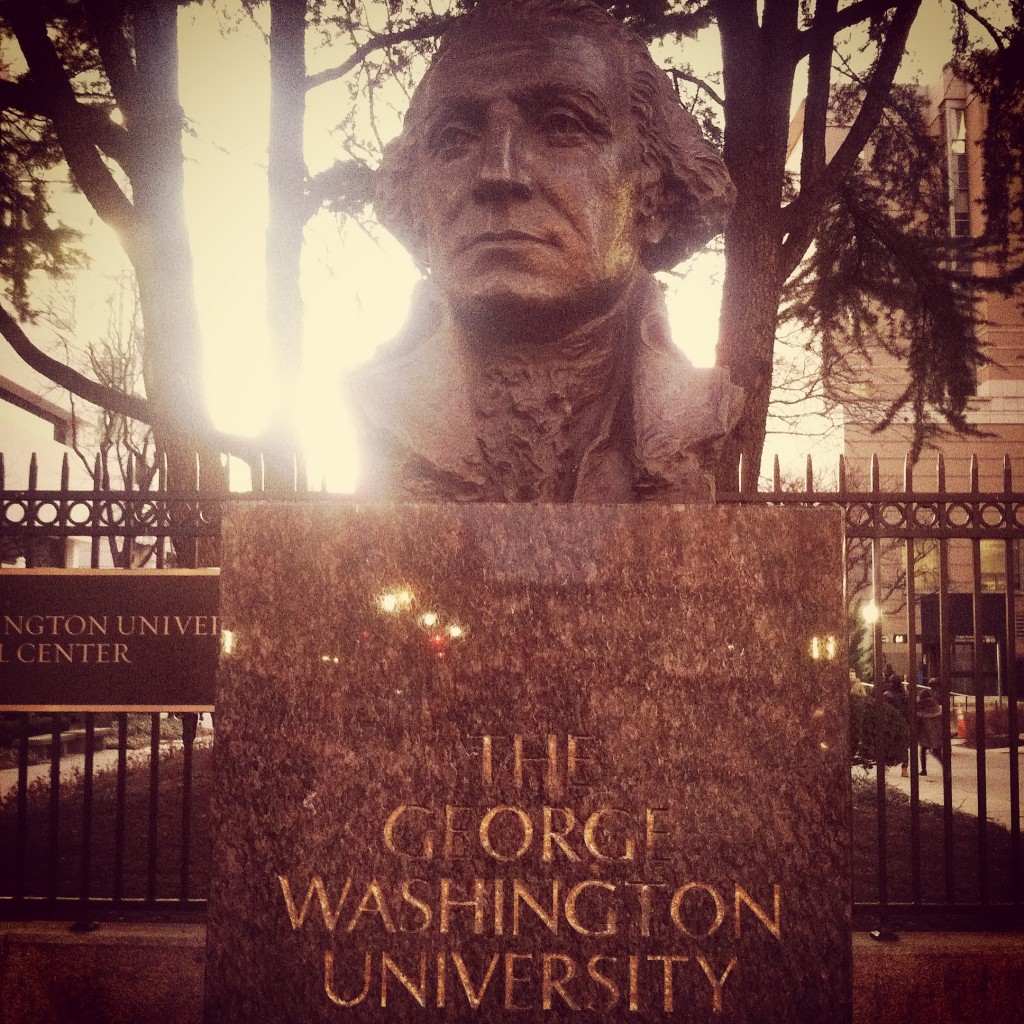 Being a sports fan in DC can lead you to the strangest places.

So there I was last Friday night, at a bar steps from the campus of George Washington University, staring at a table full of 100 or so name tags, each inscribed with the name of a University of Dayton alumni.

A young woman manning the table of tags reserved for the DC/Baltimore University of Dayton Alumni Association happy hour guests asked me for my name and year of graduation.

I, still suited up from work and feeling somewhat official (save for the fact I’ve never even been to Ohio), inaudibly mumbled something about my ticket for that nights game being purchased through the UD Alumni Association and quickly shuffled past the table and into a mosh pit of blue and red.

This night was all about hoops for the many Dayton alums who call the DC area home and the many more who traveled from the Buckeye…err, Flyer State to root on their boys. Once I grabbed a drink and body surfed through the crowd, I met up with FSB regular Matt, his lovely girlfriend/my lovely sister-in-law Emily and Mrs. FSB herself, Jennifer (her first appearance in a post, no doubt one of the highlights of our marriage thus far.)

Matt is my hotline to all things Ohio sports, and he’s an extremely reliable source. It’s rare to spot the Canton native without at least one piece of Ohio sports paraphernalia on his person. However, he’s just one man; so it was very illuminating to meet a whole damn room of people who more than likely have a Bernie Kosar throwback hanging in their closet, wrapped in a dry cleaning bag.

A few notes on the great sports fans of Ohio:

So, after several Great Lakes Eliot Ness brews, a UD cheer and a couple Jamo’s for good measure, we loudly trodded over to the Charles E. Smith Center on the campus of George Washington University. 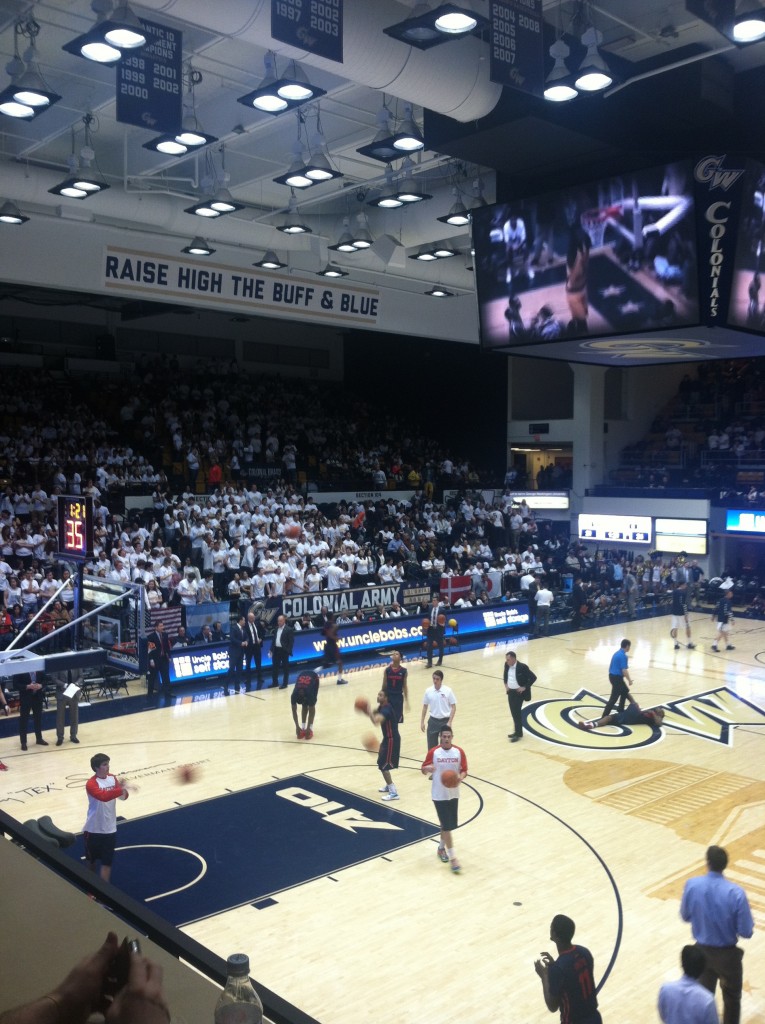 The Smith Center at GW should be an imposing venue for visiting teams. It’s compact, the students are on top of the court and it’s in a city full of great college hoops fans. Somehow, the bandbox in Foggy Bottom falls flat. I’ve been twice now, so I’m no expert, but both visits have left me feeling underwhelmed. 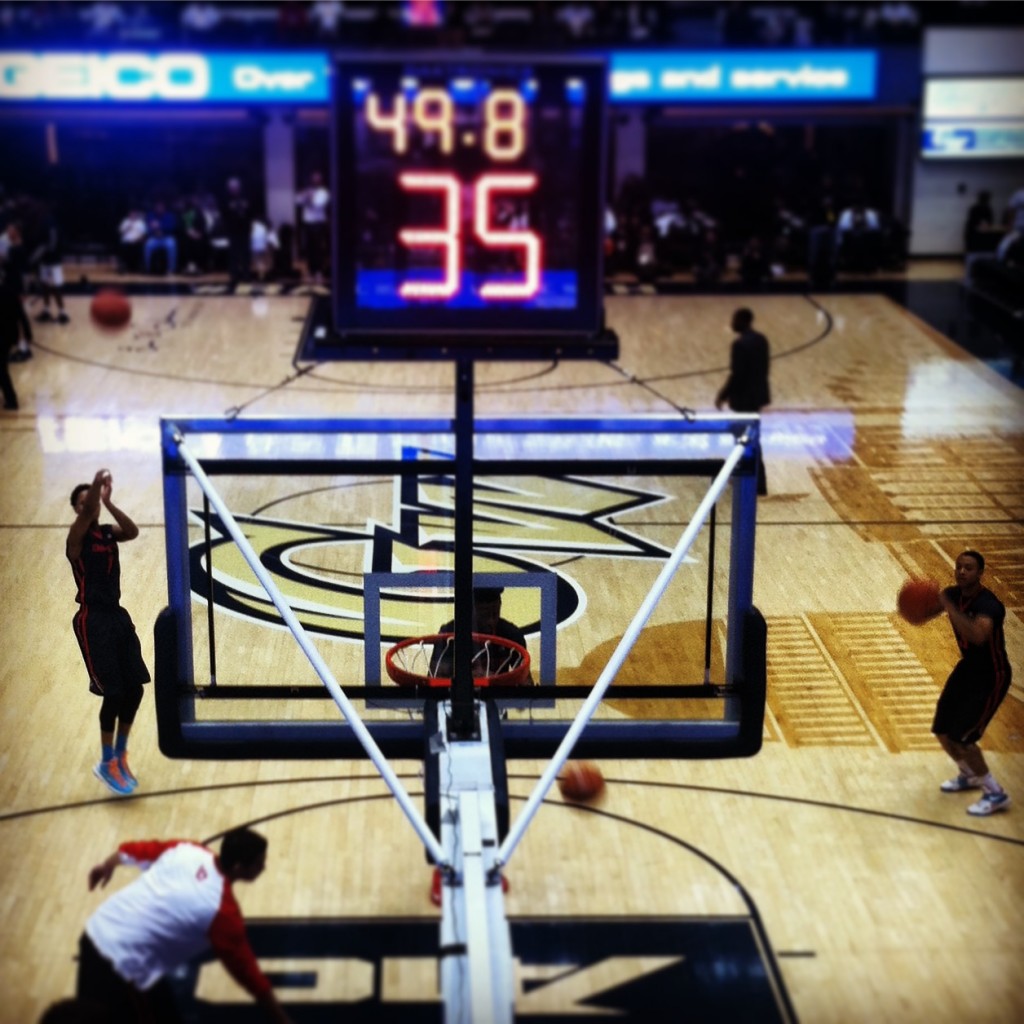 Hating on attendance figures for any given team is a tired cause in my opinion. People have lots of things to do, and going to a sporting event is just one of dozens of options. Plus, watching on TV has become more and more of an attractive option with the advent of HD TV and cheap, high quality flat screens. However, being at a big event is still a thrill; especially a college basketball game on your own campus. GW couldn’t even fill up a 5000 seat venue. Sorry guys, but that’s weak.

It’s a shame, because the Smith Center has so much promise. One big mistake is giving the high money donors an entire sideline. Move them into whatever VIP club you have because the Chardonnay and Brie tastes the same in there. The poor band is stuck up in the nose bleeds; an afterthought that’s closer to the NIT banners than the floor.

When I say this place is small, I mean it. I went to the concession stand and walked right by the team entering the court for the 2nd half. At many venues, this could feel like the old Boston Garden. At the Smith Center, it just felt like the players got lost and took the scenic route back to the court.

The game settled into a classic Friday night tug of war. College games on Fridays are rare; typically the night is reserved for the Ivy Leagues as well as a full high school slate. This game had a high school atmosphere with D1 talent on the floor; a very enjoyable game to attend. As much as I banged on Smith Center, the student section did bring enough energy to give the place some life.

Both schools have enjoyed success this year, and this game provided the stage for a collision of two programs hungry for another NCAA Tournament resume builder. Dayton was dealt a major blow in December, as two of their main contributors were kicked off the team. The short handed Flyers haven’t quit, setting themselves up for another tourney bid.

GW brought a 9-0 home record into this game, and were still in a position where every win was a useful win for their March prospects, especially against a highly rated team like Dayton. Coach Mike Lonergan acts like a buffoon on the sidelines (seriously, you don’t need to pantomime every defensive movement Mike. What do you even cover in practice?) but his team has played well this season after making The Big Dance last year.

Dayton threw the kitchen sink at the Colonials, with a fabulous defensive effort and an opportunistic offense that capitalized on run outs whenever they had the chance. The short handed Flyers could ill afford to try and beat GW in a half court battle.

The Flyers rallied late in regulation to force OT, after GW’s Kethan Savage last second shot rattled off the rim four times before harmlessly falling to the hardwood. Free basketball on a Friday in Foggy Bottom. The crowd approved.

A late one point Flyer lead was erased on the games final play, when Savage drove to the basket only to get blocked by a pair of Flyers. A missed block out by Dayton guard Scoochie Smith led to a last second put back by GW’s Joe McDonald. A terrific A10 matchup had been decided on the games final shot, after five extra minutes were needed. The beauty and agony of conference play in college basketball, summed up on a single play.

My adopted Dayton faithful took the loss as well as one could, I suppose. Full throated all game, the Flyer faithful quietly exited Smith Center, as the GW students jubilantly took to the floor for post game revelry with their victorious home team.

The cozy confines of GW’s gym were still apparent as we lingered just outside the venue doors. Band members filed out through the main exits, brass instruments in hand, as they headed back home (or maybe to a college band bar? Is that a thing?).

As we all parted ways for the evening, FSB regular Matt took a short breathe and said to no one in particular “I’m a Cleveland fan; that was nothing.”

One thought on “FSB In The Stands: Ohio Sports Fans & DC Buzzer Beaters; Dayton vs GW”