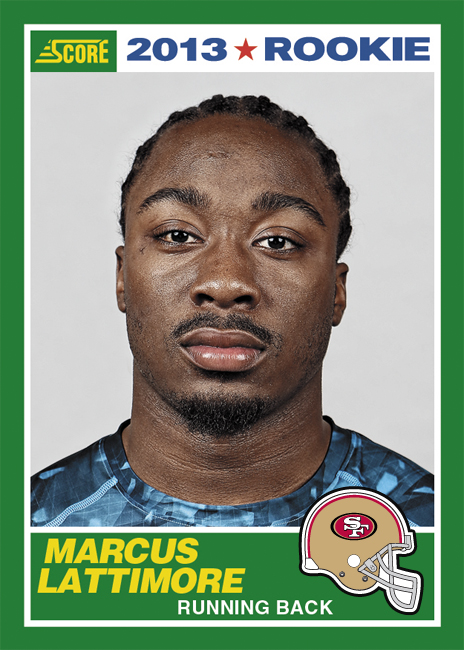 Every day, people retire. On November 5th, 2014, at the age of 23, Marcus Lattimore retired from professional football.

Retirements from professional football at such a young age more often than not aren’t a headline grabber. Typically, very talented yet undersized or under skilled athletes stop getting phone calls from teams offering a practice squad tryout and a guaranteed contract that might last a few weeks. A life spent playing football ends abruptly; the only life these players have known ends in silence. No more phone calls, no more locker rooms, no more pads cracking into moving targets.

Marcus Lattimore was destined for a career quite different from the sweat and stress a guy barely clinging to a roster spot endures. Lattimore was a running back that appeared to have been created in a laboratory; equal parts Herschel Walker, Bo Jackson and Emmitt Smith.

As a freshman at South Carolina, he would introduce himself to the SEC with zero pretense; just results. 1600 yards from scrimmage and 19 touchdowns. Coach Steve Spurrier had been languishing in Columbia until Lattimore arrived; now he had a team on the cusp of SEC championships and 10+ win seasons.

The former Mr. South Carolina high school football star would lead the Gamecocks into a highly touted 2011 season, which saw South Carolina peak at #10 in the AP poll. A torn knee ligament would cut his season short, foreshadowing his future as a football player.

Massive knee injuries in football have become common place. A perpetually violent sport; featuring bigger and stronger athletes that lay waste to each other over the course of three or four hours has desensitized the viewing public to what these guys actually go through. With massive paydays and their very livelihood on the line, players rush back to the field with the help of phenomenal surgeons, not wanting to risk missing the boat to the next contract.

Marcus Lattimore was no different, as he was back for the opening game of the 2012 season. No doubt Lattimore spent countless hours rehabbing his shredded and surgically repaired knee and set goals for himself to be back on the field as the Gamecocks opened the season ranked #9 in the country.

Now a household name in college football, Lattimore again tore through the SEC, until a Saturday afternoon at Williams-Brice Stadium would be the scene for the last snap Lattimore would ever take in a competitive football game. A routine 2nd quarter run against Tennessee ended with a prolonged stoppage, as Lattimore’s left knee was inverted in such a way that the ESPN announcers knew immediately that this was BAD. An abrupt cut to commercial cemented that sentiment.

Lattimore would declare for the NFL draft, after his junior year was ended that Saturday afternoon. A surefire top 10 pick was now left to wait — and pray — that the knife of Dr. James Andrews would revive enough promise to this once jaw dropping athlete and give him a passageway to the NFL career that was a foregone conclusion before the knee injury heard ’round college football.

A career in sports, is tough to characterize as a career; rather it’s a series of calculated risks, a lot of painstaking hard work, thankless hours perfecting your craft and some luck. I can’t even begin to imagine what must have been going through the minds of Lattimore and his family, as a promising football career now seemed completely and utterly extinguished. A lifetime spent taking risks and busting his ass had been reduced to one play, in a series of thousands played, that would strip him of his ability to play a game he had excelled at his entire life.

The 2013 NFL Draft would roll around the following spring, with the video tape of what Marcus Lattimore once was, and could potentially become again, on the board as Roger Goddell welcomed everyone to Radio City Music Hall and commenced the proceedings. This was a day that was supposed to be a coronation; instead it was a day to forget as Lattimore predictably didn’t hear his name called. It wouldn’t be until round 4 on day 3 that Marcus Lattimore would finally get selected and achieve is dream of being on an NFL roster.

The San Francisco 49ers had built the foundation of a juggernaut, and in doing so had become one of the biggest advocates of adding to your team via the draft and not free agency. Fresh off of an NFC Championship and near Super Bowl win, the 49ers boasted a boatload of picks and one of the deepest rosters in football. With an ability to literally red shirt players, it was no surprise that San Francisco used all the leverage they had in the draft to take Lattimore in the 4th round. Ask any NFL fan that day, and they would have told you what a steal this would end up being. As Frank Gore entered the twilight of his career, Marcus Lattimore would take his place and potentially break his franchise record for career rushing yards. It all seemed too perfect.

After an improbable loss last week to the Rams, where the Niners were goal to go down 3 with under a minute to go and didn’t even get to OT (Seriously?! As a 49ers fan, I felt like Ron Burgundy after Baxter ate the wheel of cheese. “I’m not even mad; that’s amazing”), Head Coach Jim Harbaugh got a reprieve from questions about his handling of the game to discuss the whereabouts of Marcus Lattimore, who was noticeably absent from the sidelines.

“Did not see Marcus,” Niners coach Jim Harbaugh said in his postgame news conference. “I’m sure we’ll have an announcement about that.”

This didn’t sound good, especially after Harbaugh had notified the press earlier in the week that after Lattimore’s first two regular season practices of his NFL career, he had to sit out the 3rd day with knee issues.

The perfect scenario was far from happening, as Lattimore had spent the better part of his two seasons as a 49er in street clothes, far from any contact. After his first two days of real NFL practice, Harbaugh had this exchange with the Bay Area press:

Was RB Marcus Lattimore out there on the field today?

Was that precaution or did he have a setback?

“He hung back in the training room today.”

Did he have a setback?

“He hung back in the training room.”

Is that to be expected for somebody who hasn’t had contact for two years? Did it give him, like, some soreness on the third day?

“Yeah, we’ll see what exactly it is, (when) we have some more information for you.”

And that was it.

A life spent on football fields, as one of the most talented running back prospects in the past 30 years, was over. Lattimore retired three days after the Rams game, and now stares down a life post football. The outpouring of admiration and respect he received from former teammates, coaches and competitors showed what kind of a guy Lattimore has been throughout his football life.

The average NFL career is 4 years, with plenty that fall well short of that. Fans typically don’t see the pain of the short career play out in such fashion, as Lattimore’s career did. More likely, the short timers run at NFL fame runs out long before Al Michaels or Joe Buck even knows your name. Marcus Lattimore had a talent taken away from him, and now moves on to the next chapter of his life, no doubt dejected at the hand he was dealt.

Every day, people call it quits on a career in sports. For Marcus Lattimore, that day was way too soon.

2 thoughts on “Done Too Soon: The Marcus Lattimore Retirement”